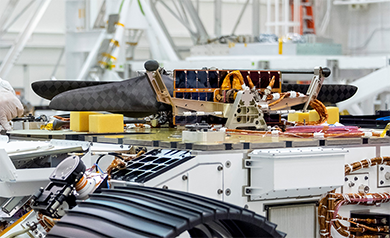 Engineers attached NASA’s Mars Helicopter, which will be the first aircraft to fly on another planet, to the belly of the Mars 2020 rover today in the Highbay 1 Clean Room at NASA’s Jet Propulsion Laboratory in Pasadena, California.

The twin-rotor, solar-powered helicopter was connected, along with the Mars Helicopter Delivery System, to a plate on the rover’s belly that includes a cover to shield the helicopter from debris during entry, descent and landing. The helicopter will remain encapsulated after landing, deploying to the surface once a suitable area to conduct test flights is found at Jezero Crater, the rover’s destination.

The Mars Helicopter is considered a high-risk, high-reward technology demonstration. If the small craft encounters difficulties, the science-gathering of the Mars 2020 mission won’t be impacted. If the helicopter does take flight as designed, future Mars missions could enlist second-generation helicopters to add an aerial dimension to their explorations.
+ More Info on the Mars Helicopter
+ More Info on the 2020 Mars Rover